Born and raised in Kodiak, Stephanie’s family owns and runs Kodiak Safaris lodge in Larsen Bay. Additionally, her father runs a commercial fishing vessel, while her brother, at the age of 31, owns and operates two.

Mostly splitting her time as a child between Larsen Bay and Kodiak City, Stephanie was hunting long before she buckled down to launch her music career and online show Krimson Trail.

Since 2006, Krimson has won the Kodiak Big Buck contest twice, when she was 15 and 16. The final win, saw her bag a deer that made it to number seven on the all-time biggest Sitka Black-tailed deer list.

In 2016, she shot three record Sitka Black-tailed deer with a bow in one day — the new sixth, seventh and eighth in the record book. 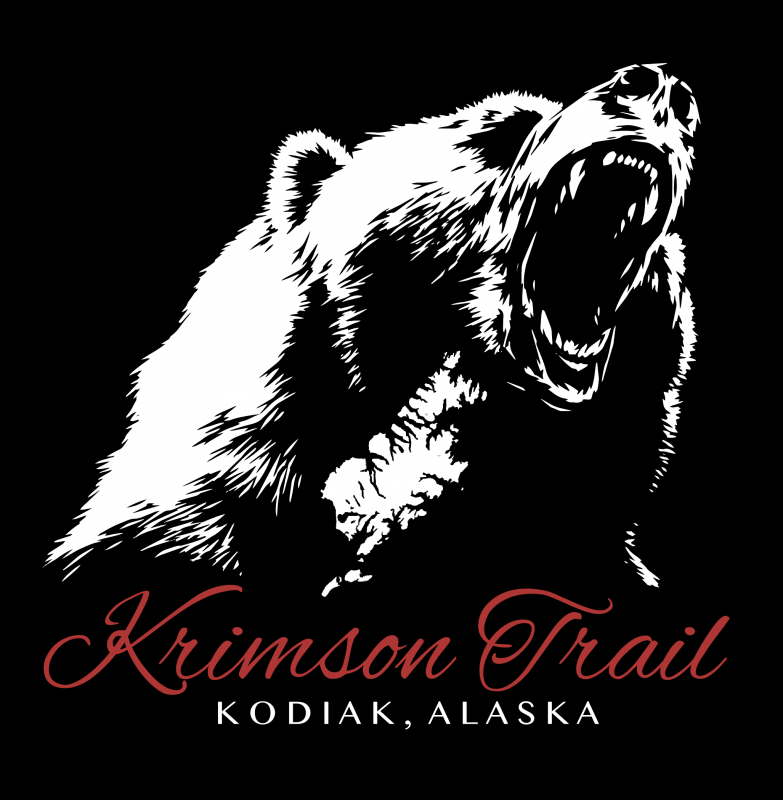 About the same time Stephanie was making her first splash in the record books, she decided to participate in a school talent show at East Elementary. She told her mother, Terri Blondin, that she was confident she could do it. Her mother told her to go ahead and give it ago.

Since then, Krimson has been writing and performing music inspired by Kodiak’s majestic beauty. Check out her music video “Elements” filmed exclusively on Kodiak here. 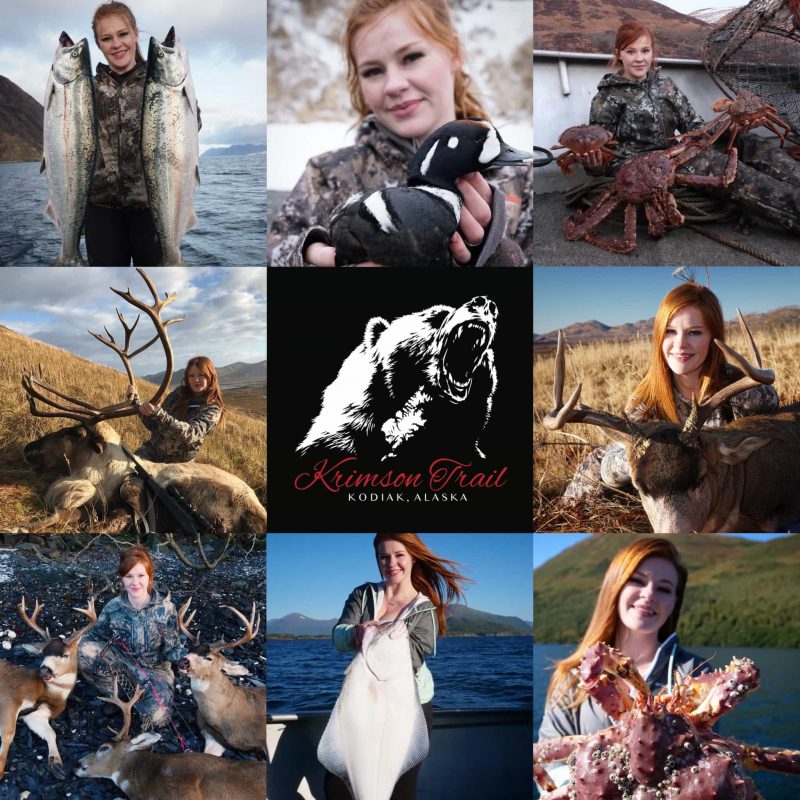 Stephanie’s skills at tracking wild game did not completely translate to her music career; there were many lost or dead end trails in the chaos of the entertainment world. However, when Stephanie was 18, she found her way to L.A. producer Davy Nathan. Nathan, who is also a songwriter, pianist and musical director, has worked with Bruno Mars, Christina Aguilera, Sean Kingston, Toni Braxton, Patti Labelle, and Todney ‘Darkchild’ Jerkins, to name a few.

Together they produced Stephanie’s four-song EP of pop dance music, as well as her most popular song, Elements. In 2017, she produced the music video Elements, filmed exclusively on Kodiak. The video went on to win Best Dance Electronic Music Video at the Akademia Music Awards.

That said, Stephanie says she’s just as comfortable glammed up in an evening gown as she is in camouflage with a gun slung across her back. It’s just that the situation she finds herself in with the camo makes her happier.

Last year, instead of shifting gears completely away from her music career, Stephanie has decided to add more to her brand in the form of Krimson Trail. She hopes that, as a hunting advocate, she will eventually be able to bring her Kodiak lifestyle to the rest of the world in the form of a Netflix Original or Amazon series.

Episodes of Krimson Trail — which she stars in, films and produces — are professionally crafted pieces that don’t shy away from the realities of fishing and hunting, from pulling a trigger to harvesting meat. So far, there are about 15 videos in her Krimson Trail series, including one on fishing in Karluk River and one explaining how to fillet a halibut, in addition to several hunting videos.

Listening to Randy talk about his daughter’s talents, there is the temptation at first blush to assume that there is a silver spoon ensuring that Stephanie is able to pay for the high-end camera gear, the studio time, and the computer she uses to produce the Krimson Trail series.

That, however, is not the case. When Stephanie is not working on “Krimson,” she is helping run the family lodge, cooking, cleaning — doing what’s necessary, and earning her way. The funds she earns from her other projects, such as Krimson Crabs, are rolled back into her dream.

“I spend a lot of money doing what I’m doing, that’s for sure, but I love what I’m doing. I guess I believe it will all come back around,” Stephanie said.

Randy and others interested in Krimson’s career, occasionally worry that she is spreading herself too thin. It’s an issue that Stephanie is well aware of, but not willing to shy away from.

“I’m really not that worried about it. A lot of people try to advise me to slow down, but I feel like doing all the different things is what makes me different,” Stephanie said.

In today’s digital-media era of one person doing it all, she might be on the right trail.

“I’m constantly busy, I’ve got lots of different goals. It sucks not having the time to focus on all of them, but I think that I still make it work. A lot of what I do is pretty seasonal, so they all take turn,” she said.

This time of year, Krimson is focused on producing Krimson Trail episodes. And, she is the one producing them — not just a pretty face in front of the camera.

“I don’t think there are enough advocates out there that can speak on behalf of hunting and positive sides of it,” Stephanie said. “A new generation has changed in so many ways. Kids aren’t getting out there and hunting and fishing and doing any of these outdoor activities anymore. They’re just getting lost in technology and there’s just a lot of values and a lot of skill sets they’re not getting to learn by getting out there and doing things outdoors.”

Helping children experience Kodiak, experience the thrill of filling a freezer with food they’ve harvested from the wild, is part of the reason Stephanie started up Krimson for Kids. Already, she’s taken five or six kids out and taught them outdoor skills.
“I’d like to be able to set up functions where kids can come to learn,” Stephanie said. “I want to start raising money for the nonprofit to fly kids up here to get an experience of a lifetime and really get in the outdoors and see if that’s what they want to do.”

In many ways, Stephanie is an ideal advocate for the outdoors. She grew up learning the skills necessary to stock her freezer with game, yet also enjoys the more refined side of the entertainment industry.

“Just because I’ve got makeup on in the field doesn’t make me any less of a hunter. I can do both.” 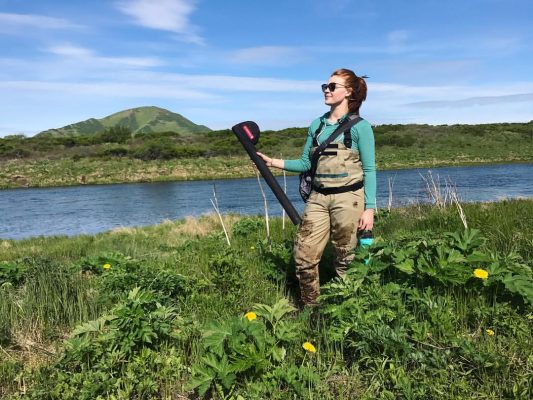 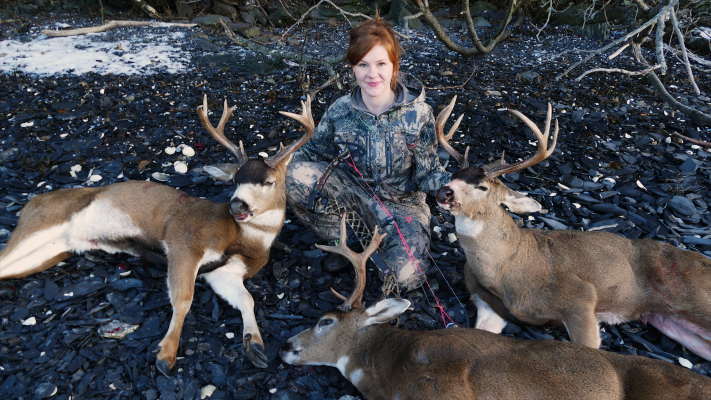 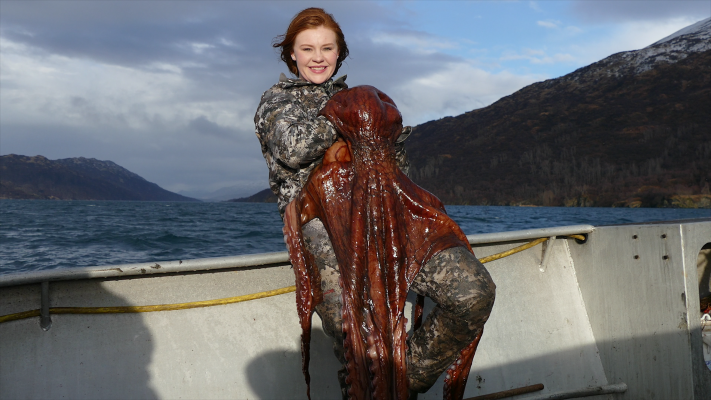 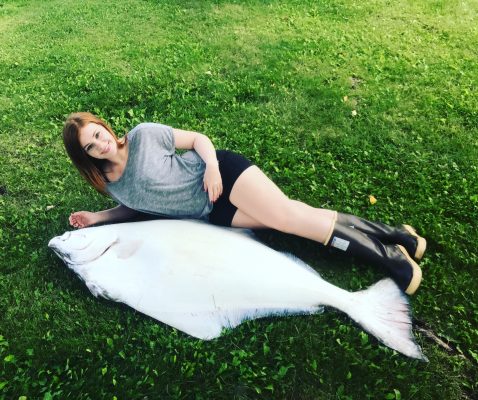 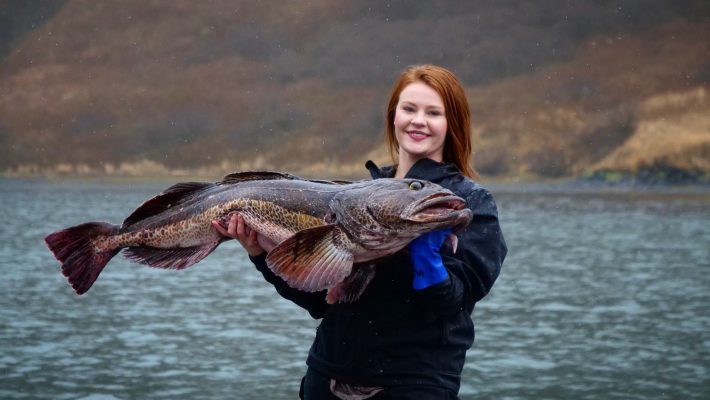 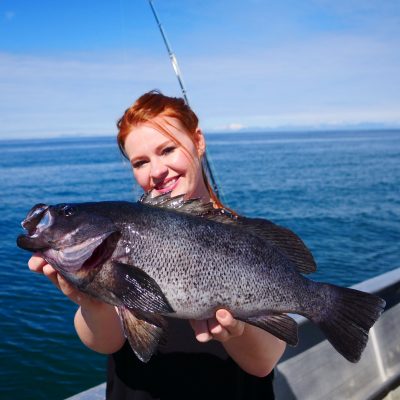 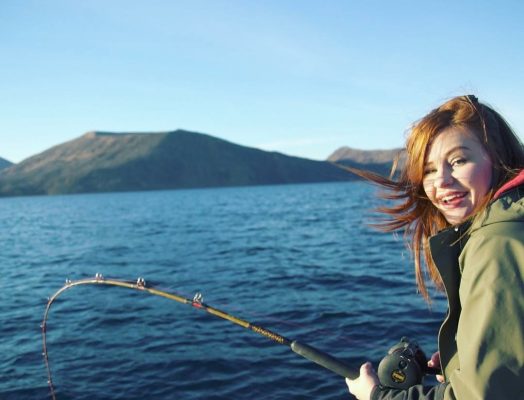 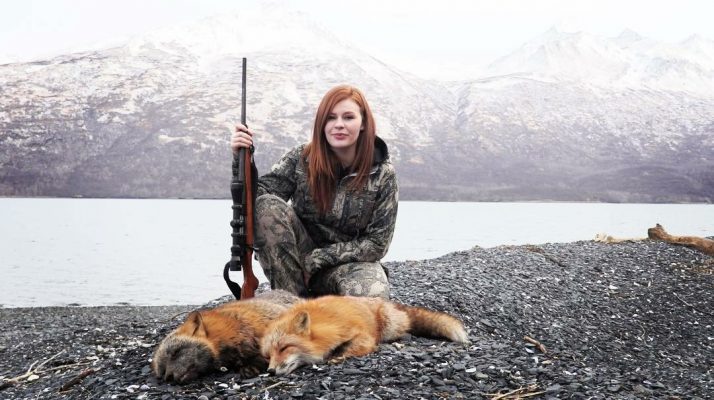 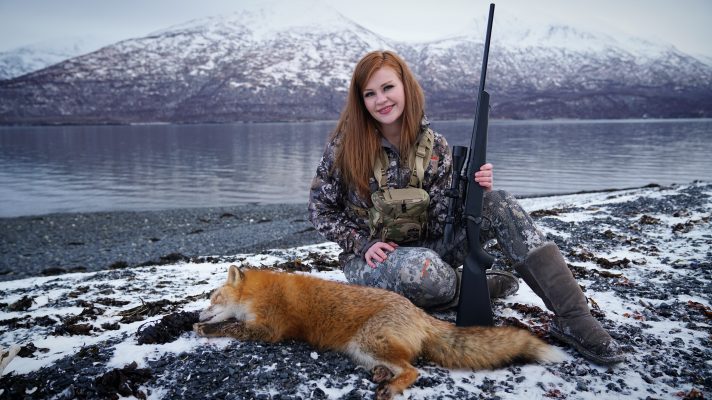 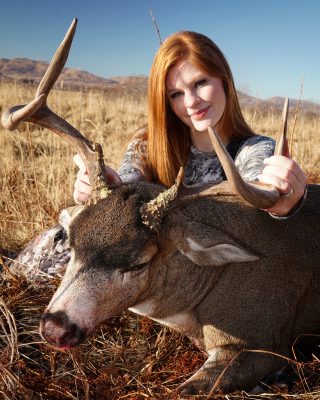 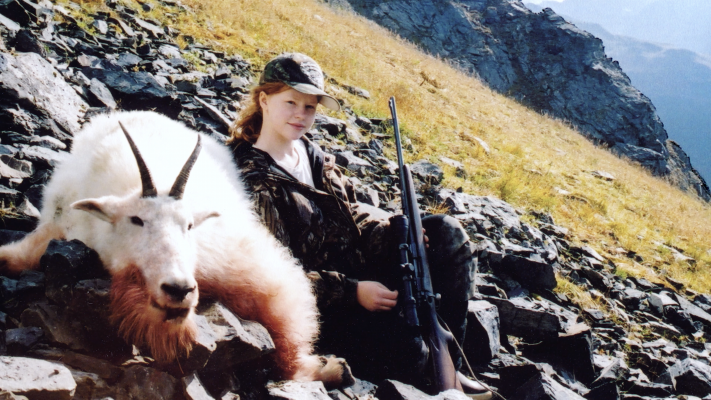